Seminar on Danish and Chinese literature at the Danish Cultural Institute 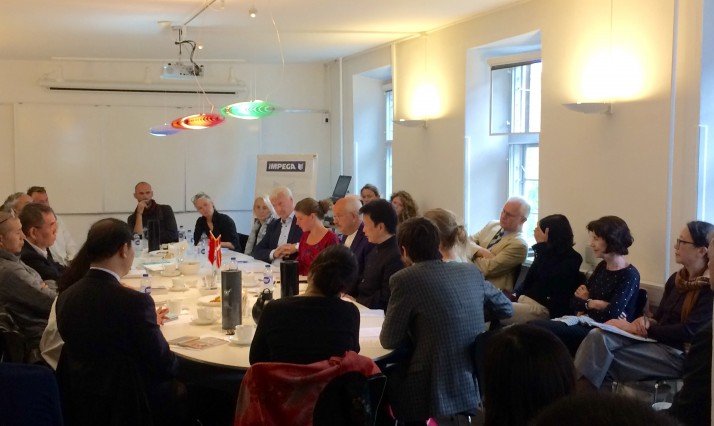 On September 7, Danish Cultural Institute had the pleasure of facilitating a groundbreaking meeting between the literary worlds of Denmark and China when representatives from the China Writers Association and the Danish Authors Society were brought together for a seminar arranged by the Danish Cultural Institute. The seminar was meant to serve as an initial foundation for literary exchange between Denmark and China. On the program for the seminar were discussions about modernism in Danish and Chinese literature as well as the role of the writer and of literature in today’s society.
Vice chair for the Danish Authors Society Kirsten Marthedal as well as a number of Danish authors took part in the meeting. Furthermore, the Danish party included illustrators, publishers, translators, and people within academia, the Agency for Culture and Palaces, and the Danish Arts Foundation. The Chinese delegation included Vice President of the China Writers Association Qian Xiaoqian 钱小芊 and General Director of the department of international liaison Zhang Tao 张涛. They accompanied four award winning Chinese authors Bi Feiyu 毕飞宇, Yang Hongying 杨红樱, Dongxi 东西, and Ge Fei 格非.

While the four writers have yet to be translated into Danish, they are by no means lacking in accomplishment. All writers have received prestigious Chinese literary awards and have been translated into several languages. Ge Fei, Bi Feiyu and Dongxi have all been awarded the Lu Xun Literary Prize, which is considered one of the finest literary prizes in China. Yang Hongying was nominated in 2014 for the Hans Christian Andersen Award, and her children’s books and fairy tales have sold more than a trillion copies worldwide. The representatives from the Danish publishing world saw great potential in bringing forth Danish translations of these Chinese authors to the Danish readership, which has an increasing interest in Chinese literature.

The seminar was concluded with the signing of an understanding between China Writers Association and the Danish Authors Society, which cemented the will to working towards further collaborations between Denmark and China. Furthermore, Vice President of China Writers Association Qian Xiaoqian extended an invitation to come to Beijing and continue the discussions – an invitation which we at the Danish Cultural Institute look forward to accepting in the nearest future. We hope that the first stone has been laid to many diverse literary projects and exchanges in the future.